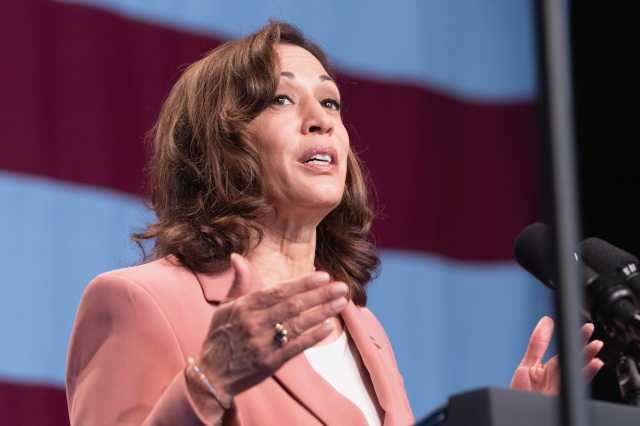 (Rallying Patriots) – Vice President Kamala Harris has finally come out and officially broken the silence of the Biden administration concerning the raid that happened last Monday on former President Donald Trump’s Mar-a-Lago estate in Florida. And you know what? What she did in response to a question asked about the raid will make you despise her even more than you probably already do.

Harris actually seemed to be giggling while answering the question. This could be some kind of nervous tick she has as she’s known for her wild cackle which often breaks forth at inappropriate times. Or it could be her sheer delight in seeing the FBI turned into a weapon against Americans who disagree with her political views.

In a video obtained by Fox News and reported on by White House correspondent Jacqui Heinrich, Harris responded to the raid by framing it within her experience as a prosecutor.

“Well, as a former prosecutor I will tell you I don’t speak about anybody else’s case,” she went on to tell reporters with a chuckle, according to Fox News. “But I have full confidence that the Department of Justice will do what the facts and the law requires.”

“I will say as a former prosecutor but as a citizen of our nation, any attacks on law enforcement are completely unacceptable and any so-called leader who engages in rhetoric that in any way suggests that law enforcement should be exposed to that kind of danger is irresponsible and can result in dangerous activities,” Harris stated in conclusion, according to Fox News.

Joe Biden has yet to come out and deliver any sort of official comment on the raid that targeted Trump’s home, with the only official word that has come from the administration being that they were not aware of the FBI’s plans to raid Mar-a-Lago beforehand.

However, Harris’ comments backing law enforcement seem to contradict some previous statements that she’s made regarding cops.

“Many cities in our country spend one-third of their entire budget on policing. With all the responsibilities those cities have, one-third on policing?” she stated in an interview with The New York Times in June 2020. “If anyone thinks that the way we’re going to cure these problems is by putting more police on the street, they’re wrong.”

During an appearance Harris made on the “Good Morning America” program back in 2020, she was thrilled by Los Angeles Mayor Eric Garcetti for defunding the city’s local law enforcement department, according to a report from KABC-TV.

“I applaud Eric Garcetti for doing what he’s done.” pic.twitter.com/2eWH1t67fv

And that’s not all. We also have a tweet from June 2020 where she stated her support to end qualified immunity for cops, which would then open them up to civil lawsuits brought about by the public.

We need to end qualified immunity for police officers so that victims of police brutality and excessive force can seek justice in court.

Then-vice presidential candidate Harris also stated during a campaign event held in September of 2020 that, “It is outdated, it is wrong headed thinking to think that the only way you’re going to get communities to be safe is to put more police officers on the street.”

Kamala Harris: “It is outdated, it is wrongheaded thinking to think” more police officers on the street will make communities safer. pic.twitter.com/UC2t2estzY

The bottom line is it is disingenuous for Harris to act like she’s always been a big supporter of law enforcement officials in any capacity when there is plenty of proof to the contrary.

What it boils down to is that she’s happy that the FBI targeted Trump because according to the radical left the man is enemy number one and as such, so are all of those who support or follow him. This is dangerous thinking. If the FBI, as a political weapon, was not afraid to go after Trump, a former president, they will not be afraid to come after you and me for not being on board with their ideological agenda.