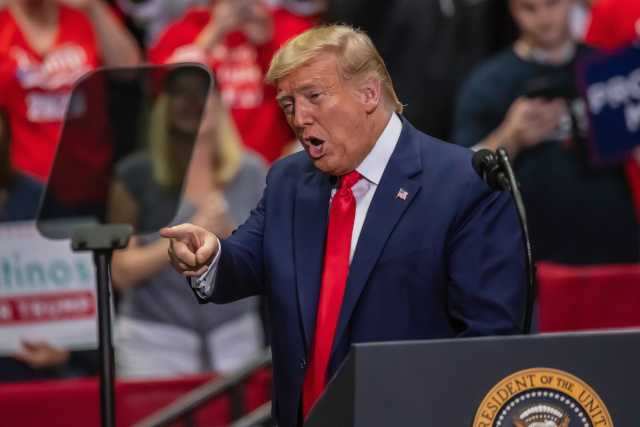 (Rallying Patriots) – Former President Donald Trump put Biden in the proverbial crosshairs and blasted away, accusing the administration for allegedly having prior knowledge of the FBI raid on his Mar-a-Lago residence in Florida, going on to say that President Joe Biden “knew all about” it.

Trump, in a previous post on his account, went on to lament what happened at his estate on Monday.

“We are no better than a third world country, a banana republic,” Trump stated. 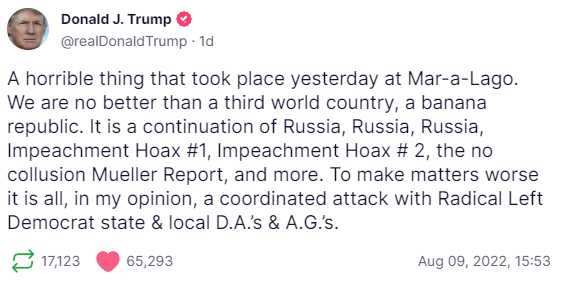 According to a report from Fox News, the former president then made the suggestion that the FBI raid was simply a continuation of the Russian collusion nonsense the left had leveled against him during his presidency.

“To make matters worse it is all, in my opinion, a coordinated attack with Radical Left Democrat state & local D.A.’s & A.G.’s,” Trump went on to say.

“The White House has repeatedly said President Biden did not have any prior knowledge of the FBI raid, and learned of it through public reports ‘just like the American people,'” the Fox News report said.

Sec. Jean-Pierre: Biden "was not aware of, uh, the, uh, what was it, the Mar-a-Lago raid? I don't know what you guys are calling it."pic.twitter.com/Xa5mwxmlIC

“No. The president was not briefed, and he was not aware,” White House press secretary Karine Jean-Pierre replied after being asked if Biden or any White House officials were aware of the raid or had been briefed about it before it happened. “No, no one at the White House was given a heads-up. No, that did not happen.”

Senior White House officials found out about the FBI’s Mar a Lago raid on Twitter, had no notice, per source familiar

“Agents on Monday searched Trump’s Mar-a-Lago estate, which is also a private club, as part of a federal investigation into whether the former president took classified records from the White House to his Florida residence, people familiar with the matter said. Trump was in New York City at the time on his way to Bedminster,” the report continued.

“A federal judge had to sign off on the warrant after establishing that FBI agents had shown probable cause before they could descend on Trump’s shuttered-for-the-season home — he was in New York, a thousand or so miles away, at the time of the search,” the report added.

At the end of the day, we all know this was a political attack on Trump. The radical left is terrified that he might actually be serious about running for president again, so they are attempting to prevent him from being able to do so by finding damaging intelligence that could result in his being disqualified from the race.

Another cheap tactic to buy them time to find a way to stay in power permanently.