(Rallying Patriots) – Conservative Rep. Marjorie Taylor Greene (R-GA) has a big target on her back for leftists. She’s been an outspoken supporter of President Trump, fearless in calling out the 2020 election shenanigans, and bold in her fight against the radical left.

Last week, leftists proved just how much they hate her when they “swatted” her in what appeared to be an attempt to have her murdered by police.

“Swatting” is a criminal harassment tactic that involves deceiving an emergency service, such as the police, into sending a response team to the home of another individual based on the false reporting of serious events like shootings, bomb threats, or hostage situations.

Greene found herself the victim of such a tactic last week when a team of tactical police showed up to her home in Rome, Georgia, in the dead of night while she was fast asleep.

The caller reported to police that there had been a shooting at Greene’s home early Wednesday morning and someone was dead in a bathtub and that there was a suicidal woman with a gun and children in the house.

None of this was true at all. When the police showed up at her home, Greene was confused and concerned. She then became convinced the goal of the “swatting” was to have her killed by police.

“Absolutely, 100%, they wanted me to be murdered, death by cop. That’s what swatting is. And they were doing this in hopes that the police would kill me,” Greene said in an extensive interview about the event on Right Side Broadcasting Network.

All of this because Greene is a strong opponent of gender-altering surgeries for children.

Greene recalled how her first instinct was to grab an AR-15 by her bed before going to answer the door. Fortunately she decided against carrying the gun with her to the door and that turned out to be the best decision she could have made.

“It was truly a God thing that I had that feeling not to carry that gun with me to the front door, because had I have done that, we would have been in a whole different scenario, because I probably would have been the target, and that is the whole purpose of swatting someone,” she said.

After the initial ordeal, a second call came into the Rome police admitting to the swatting and said they did it because Greene opposes gender reassignment procedures for minors. She has introduced legislation to ban such operations on anyone younger than 18.

On Thursday, however, there was a second swatting attempt. This time the caller claimed to be from a suicide hotline and told police there was more violence happening at Greene’s home.

All because of her political views. The irony is that the people making these calls are attempting to make Greene appear mentally unstable when it is actually they who are totally unhinged and unstable.

"Someone wanted to kill, have me killed, wanted to have the police murder me because I'm trying to protect kids." @RepMTG

The second time officers visited Greene’s home on Thursday, the officer told her “they did it again” when she answered the door.

During the interview, the 911 calls were played and surveillance footage from Greene’s home was shown, including images of police officers entering her home with guns drawn.

The attacks have only strengthened Greene’s resolve to continue fighting the anti-American radical left.

“I think what everyone needs to understand about me is all of these things that are coming against me and the hate on the Left, on it actually makes me dig in harder. And it’s a conviction inside of me. And I will fight harder, and I will keep going. It actually fuels me. So they can try whatever they want. I won’t stop,” she said.

The Washington swamp needs more patriotic Americans like Greene to stand up against the left and fight for what’s right, no matter the cost. 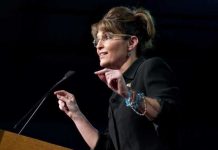