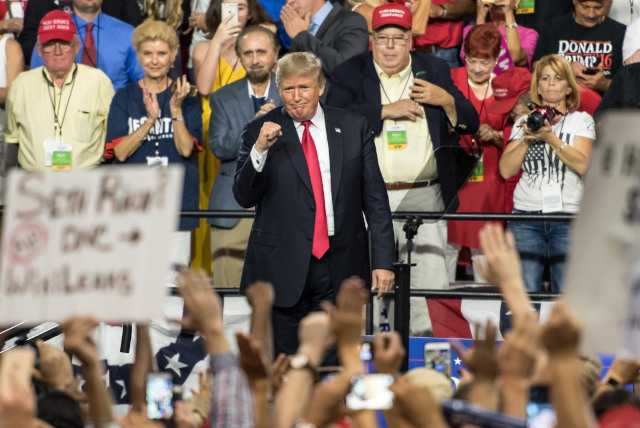 (Rallying Patriots) – There are two individuals in the world of politics right now that have become the standard bearers for what authentic conservatism in action looks like. Those two are former President Donald Trump and current GOP Florida Gov. Ron DeSantis. Both of these men have demonstrated that when you present yourself as having a steel backbone and you fight back, truly and sincerely, against the liberal madness destroying our country, you can and will be victorious.

With DeSantis having fought back against the government’s insane COVID restrictions and winning, passing legislation to protect children in public schools from perverse teaching, and taking down Disney and PayPal for trying to oppose that same bill, many have wondered whether or not the Florida governor would be running for president in 2024.

Many folks have assumed Trump is going to run again. He’s dropped a number of hints and a lot of the posturing he’s done over the course of this year certainly seems to indicate that an announcement of his intentions is likely to occur after the midterms.

If the two of these men run, who will Americans choose to take on Biden? That’s a choice a lot of conservatives don’t want to make, though polls have, for the most part, given DeSantis a slight edge here and there. Not every poll, but quite a few.

However, according to a piece published in RealClearFlorida, there have also been a number of individuals who have come up with a rather brilliant idea. Trump should run for president and if he wins the nomination, choose DeSantis as his vice presidential running mate. Talk about an unstoppable duo. Liberals would wither away at the sight of their archenemies doing a team up like this. It’s like The Avengers or something. Superman and Batman teaming up to save the country.

However, the piece points out that there’s a possible snag with this idea. That snag is the 12th Amendment of the Constitution.

“Some caution, however, that the 12th Amendment might prevent such a ticket, since it seems to suggest that two candidates from the same state cannot run on the presidential ticket. The language of the amendment reads: ‘[t]he Electors shall meet in their respective states and vote by ballot for President and Vice-President, one of whom, at least, shall not be an inhabitant of the same state with themselves,'” the piece said.

“Right now Trump and DeSantis are both residents of Florida. But this issue has emerged before. In 2000, right before Governor George W. Bush of Texas chose businessman and former congressman Dick Cheney as his running mate, ABC News published an article arguing that a Bush/Cheney ticket would face legal hurdles because Cheney maintained residency in Texas during his business career,” author of the piece, Todd Carney, wrote.

Carney then went on to say, “Cheney moved to Wyoming four days before Bush selected him as his running mate, and Bush/Cheney went on to victory. Liberals attempted a legal challenge on the residency issue, but courts and the legal community soundly rejected it. Cheney’s move to Wyoming put an end to the issue. The courts reasoned that Cheney had fulfilled the residency requirements by doing so.”

“The Bush/Cheney ticket is arguably a reverse version of a Trump/DeSantis ticket: Bush and DeSantis were both sitting governors, and thus ineligible to move. Cheney and Trump are businessmen with deep ties to other states. Some would say that Cheney had a major advantage that Trump does not. Cheney’s previous state of residence, Wyoming, loved him. Trump’s previous state, New York, is vigorously pursuing legal charges against him,” Carney wrote in the piece.

But, Carney points out, there isn’t really a reason the former president would need to relocate to New York. Technically, he could move to a number of states including Tennessee, Nebraska, Wyoming, or basically any state that would have a favorable reaction to his calling it his home. It doesn’t matter because Trump has no affiliation with any of those states.

“It’s worth noting that U.S. case law has opposed extraneous residency requirements for people running for Congress. This flexibility has allowed people like Alan Keyes and Hillary Clinton to move to new states to run for office. True, this case law has concerned states creating extra laws, as opposed to interpreting the 12th Amendment; but given that the judiciary has used the Constitution to strike down these laws, it is unlikely that the same judiciary would hold for extensive residency requirements to prevent someone from getting elected president or vice president,” the article stated.

Carney then goes on to explain that while arguments might be made for why a Trump/DeSantis ticket might not happen or could potentially be a bad idea, a legal argument against such a ticket based on the principle of state residency is rather flimsy.

Personally, the only real drawback that seems evident by Trump and DeSantis joining forces is that it would leave the state of Florida, a very important state for conservatives, wide open to the influence of the Democratic Party. Other than that, it seems like a brilliant play, one that could set up a future run for the White House for DeSantis after Trump serves his second, final term.

And boy would that be awesome.